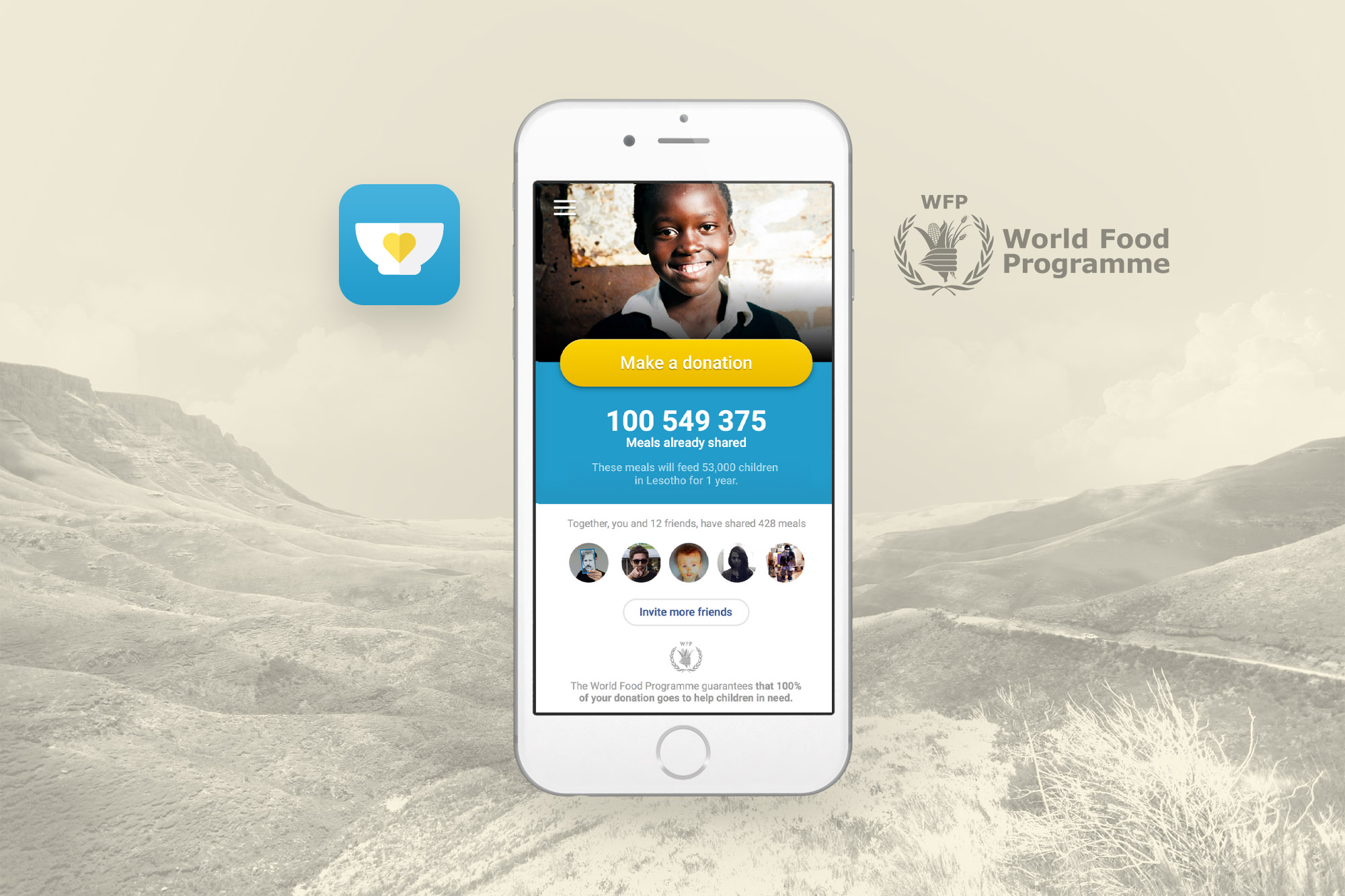 Between 2015-2016, I worked on ShareTheMeal, a project from the startup accelerator of the World Food Programme.

In 2015, the United Nations ratified seventeen global Sustainable Development Goals to reach by 2030. Among the most urgent goals was creating a world with Zero Hunger.

Born from the UN World Food Programme's innovation accelerator, ShareTheMeal had a bold, visionary idea how this ambitious goal might become reality: Collect micro-donations from billions of smartphone users to fund regional WFP programs to provide school meals for children in need.

As part of AJ&Smart, I worked with the ShareTheMeal team on concept, design and implementation of the launch version of their app, and also contributed to the further development of product and feature iterations.

Since the launch, ShareTheMeal has funded over 60 million meals to children in need in need all over the world.

When we started working with the ShareTheMeal team, a first version of their app existed as a technical proof-of-concept. But it wasn't quite ready for prime time, and we identified a couple of key challenges that needed to be solved to get ShareTheMeal ready for its public launch.

When we started working with ShareTheMeal, their app consisted of just a button, a donation counter and a map.

It proved the concept's technical feasibility, but it wasn't perceived as compelling or trustworthy in several rounds of user testing.

Between 2015 and 2016, we worked closely with ShareTheMeal's founder and CEO Sebastian Stricker and his product team. Together, we created feature concepts to solve each challenge, turned them into interactive prototypes, and tested them with users over several Design Sprints.

The feedback on each of the prototypes was analyzed and used to iterate quickly on each of the solutions, until we were sure the features were ready for implementation by the ShareTheMeal team. This increased focus and alignment, but also saved time and resources, and reduced the risk of technical debt.

With our design and product expertise, we helped ShareTheMeal to leverage innovation and technology for social impact, and combined it with a first-class user experience for a growing audience.

To this day, donations from ShareTheMeal's users have funded over 60 million meals for children in need in countries like Lesotho, Syria, Malawi, Cameroon, Venezuela and many more. ShareTheMeal funded meals not just for school children, but also for assisting in disaster relief and helping refugees.

ShareTheMeal was repeatedly featured on Apple's AppStore and was picked two years in a row as one of Google's Best Apps in 2015 and 2016, and won the Google Play Award for Best Social Impact in 2017.

It also received the 2015 Lead Award for the Startup of the Year, the SXSW Award for Interactive Innovation and the Webby People's Voice Award for Mobile Best Practices in 2016, and the 2018 German Design Award for Apps and Design Excellence.

ShareTheMeal is rated exceptionally high by its users, with 4.8 out of 5 rating on Apple's App Store, and 4.9 out of 5 on Google Play, based on over 20,000 reviews.

Sebastian, ShareTheMeal's founder, was so happy with the help we provided that he worked with us again when he started his new social venture, Share Foods!